To all parents who look at their teenagers — those strange alien creatures who know everything and about everything and believe you know nothing about anything — and cannot imagine them as coherent and responsible adults, I promise there’s hope. For instance, let’s say you have a teenage daughter who sports purple hair and multiple piercings (when she can get away with it) and has the annoying habit of seeing how far she can stretch  parental boundaries. I just 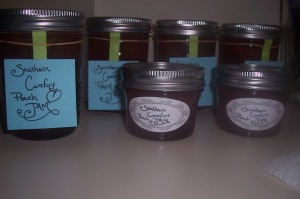 happened to randomly pick this example, by the way. Nothing to do with any real person at all. Not at all. Anyway, if you’re in this situation, do not despair. It will seem as if one day your teenager incurs multiple weekends of enforced home time due to multiple infractions of parental rules (“No. 3. Being home by curfew means all parts of your body are inside the house and the door is closed. It does not mean you’re in the same general zip code.”)  and the next day she’s a wife and a mom and a Martha Stewart devotee who gets her whole family involved in making batches of lovely and delicious peach jam. Promise.

Here are some things I’ve written lately — a couple of food stories and my weekly newspaper column — that you might like to read. And this does not mean I’m too lazy to put up a blog post this morning. No, it does not mean that at all. Nope. Definitely not.

Did you know that food can help you deal with the stress of this weekend’s time change? It’s true. Studies show that the first few days after springing forward (and you have to do that this Sunday morning, remember) can be stressful as folks adjust to the changing routine. But using mealtimes as a way to combat the effects of eating breakfast in the dark and supper at 10 p.m. can help! (This story includes some fun and easy breakfast ideas.)

And don’t forget that St. Patrick’s Day is Thursday. Even here in northwest Alabama, where leprechauns are pretty rare and Guiness is considered an exotic brew, there’s a deep Irish connection we can honor with food.

I’m almost 54 years old. I still do not always understand men. And by “men,” of course, I mean my husband. But when the “men” are a precious 3-year-old who’s cute and sweet and has a smile that makes me melt and say things such as “Sure, sweetie, I’ll read ‘Cat in the Hat’ again for the fifth time,” I understand completely.

Oh, Crazy Town! How I’ve missed you! The Land of Stars, Sparkles and Sequins … otherwise known as Dancing With the Stars.  Welcome back!!! You bring joy and happiness every time you reappear. Aw, c’mon now. You there — I see you rolling your eyes. But have you tried DWTS? Have you actually sat down and watched the fabulousness that is The Journey to the Mirrorball? I have to admit that I’m a late adopter. When it first came on, I thought DWTS was simply about dancing. Wrong, wrong, WRONG! Once you realize that the dancing is only an excuse for the crazy, you can’t get enough. I’m telling you: DWTS is crazy in its purest form. There’s bad music, bad hair, bad jokes. There are various stages of fake tans. There are fake eyelashes unlike any ever seen anywhere. And, the very absolute best of all, there are fashion choices that … well, all I can say is that Younger Daughter and I thanked the Mirrorball Gods of Ultimate Crazy for co-host Brooke Burke’s “is-she-seriously-wearing-that?” dress from Monday’s premier show. It can only get better from here. 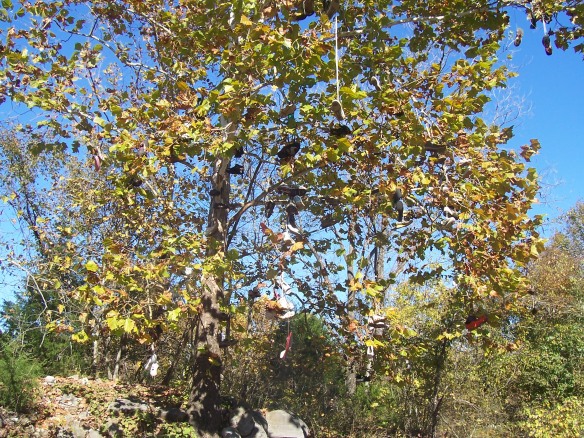 You have to look carefully, but when you do, you’ll see that

this tree on U.S. Hwy. 72 west, just west of Cherokee, Alabama, is full of shoes. It’s been this way for at least a couple years, and nobody is sure how it got started — or why. Or at least, nobody’s telling. You’re just driving along and then you look up and there are dozens of pairs of shoes nestled in and dangling from this tree. It’s a true mystery. I drive past it at least twice a week and I’ve never seen anybody adding their contributions — yet the Shoe Tree grows and thrives. Some say the Shoe Tree has its origins in the infamous wave of Shoes Thrown Over the Power Line in downtown Florence, Alabama, several years ago. This was a power line across from a local coffee house that was a hangout for the youngsters (actually, the sidewalk in front of the coffee house was the preferred spot) and every once in a while the within-tossing-distance power line would sprout a decoration of tied pairs of shoes. Did those Shoe Throwers grow up and now commute on U.S. 72 every day? My investigative-reporting skills have failed to find the answers. But that’s OK — I’ve got my eye on a pair of black stiletto pumps if I can just figure out how to get to the top branch. 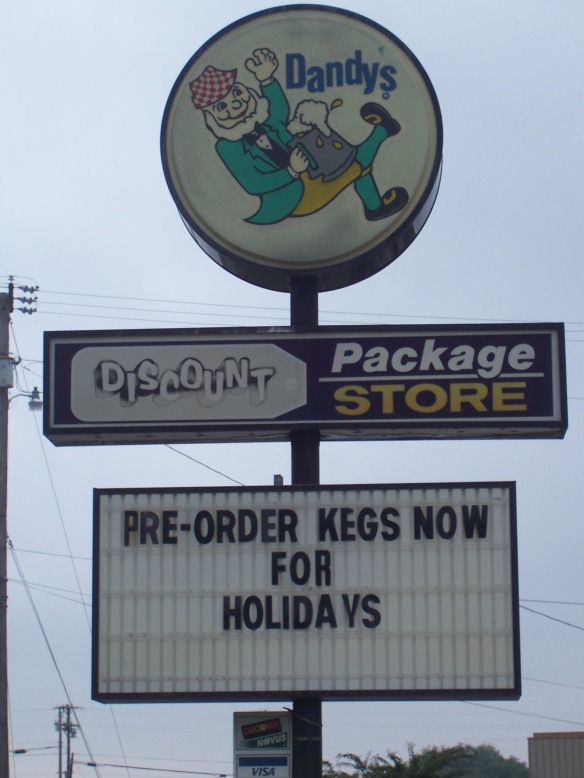 ... because nothing says "Christmas" like planning your keg party.

This is absolutely hilarious: http://www.youtube.com/watch?v=W3ijYVyhnn0 or if that doesn’t work, go to www.youtube.com and search for Les Misbarack

I have watched this for three days straight and it still cracks me up. Genius!

I do not understand this street sign, which is in a neighborhood I pass 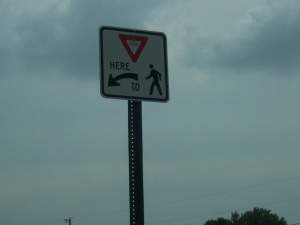 through about a dozen times a day. My husband says it’s very simple: The sign is at a crosswalk at an intersection and it’s telling drivers to yield to pedestrians as they walk across the street on the crosswalk. Then why, I wonder, doesn’t the sign just say “Yield to Pedestrians” like every other “yield to pedestrian” sign does? Are yellow triangles not good enough anymore? Are the street-sign makers afraid we drivers don’t know what “pedestrian” means and so have resorted to hieroglyphics? By the time a typical driver (say, me) has translated the sign — which seems to be quite small in proportion to its stated purpose of protecting pedestrians — there’s a line of irate drivers honking in frustration. And why the extra cautionary arrow to especially avoid pedestrians “from here to?” I want to know: From here to where? If we have to be told to yield to pedestrians beginning at a certain point, then we need that ending point, too. Do not leave us hanging, infinitive-wise. Besides, shouldn’t we always yield to anybody out walking in the street, whether there’s a sign instructing us to do so or not? Just common courtesy, seems to me.

“I can’t talk right now,” I said to my younger daughter when she called Sunday night. “Apparently I’m having a fire.”

Of course, she completely understood as I explained to her that the roll of paper towels I’d put on the dining-room chandelier to dry out had started to glow and smell like a campfire when I forgot it was there and turned on the lights. It was on the chandelier because it had gotten damp under the kitchen sink and I wanted a safe place to dry it out because I am too frugal (cheap?) to throw away a perfectly good roll of paper towels. The paper towels were under the kitchen sink instead of out on the counter where normal people keep their paper towels because if a roll of paper towels is left out in our house the cats immediately attack it and reduce it to shreds since obviously paper towels are a Major Threat in Cat World. The roll had gotten damp because I had over-enthusiastically washed dishes and water dripped down the cabinets and into the under-sink area. Ironically, of course, I had to douse the smoldering paper-towel roll in the very same sink and throw it away after all. So there you go. And luckily my husband was watching TV (football, of course) and didn’t notice — or I would have had some explaining to do.

Naturally, the thing that really disturbs me about this whole episode is not that I’d forgotten the paper-towel roll was on the chandelier when I turned the lights on or that my husband was so engrossed in TV he didn’t notice smoke but that my daughter was not surprised any of this happened. To me.