You know you are deep in Southern territory when women driving open-air Jeeps keep an aerosol can of hairspray handy. Reminds me of the time many years ago when now-husband John Pitts called me from his office in Washington, D.C. “My ink pen exploded all over my shirt,” he said. “Any advice for getting it out?” I replied with the universal antidote: “Sure. Ask one of the women there if you can borrow their hairspray and then saturate and blot.” There was a pause and then laughter. “You forget,” he said, chuckling, “that this is not the South. I bet none of the women I work with even know what hairspray is.” Putting aside the argument that Washington IS, in fact, the South, it is true that hairspray — lots and lots of hairspray — is a Southern essential. Especially in Jeeps.

Memorial Day is pretty much like any other day for my husband, a newspaper sports editor. He does go in to the office a bit later than normal, but there’s no time for cookouts or picnics or parties. So I wondered what he had in mind when he asked if I’d like to help him do something before he left for work today. Turns out he had a different sort of Memorial Day celebration planned. We drove to the Corinth National Cemetery, just a mile or so from our house, where  Boy Scouts and other volunteers had decorated gravestones with American flags today. It’s a beautiful spot — quiet, peaceful and shady — especially with thousands of flags fluttering in the breeze. He and I drifted into different areas, and when I caught sight of him again, he was in a far corner of the cemetery. I noticed him bending over individual markers, coming back up with a flag in his hand, waving the flag around and then bending back down, over and over again: He was picking up flags that had fallen over on the ground, waving them around to air out the wrinkles and then placing them back upright next to the gravestones. “It just seems like the right thing to do,” he said, as I joined him. We didn’t cover the entire cemetery, but we straightened quite a few flags. And we talked. About the origins of this cemetery — the U.S. government established it in 1866 for Union casualties of nearby battles, so there are only three Confederate soldiers buried here. About the older couple we watched place an arrangement at the marker of a young man killed in the Persian Gulf war — was he their son? About the markers listing service in multiple wars — World War II, Korea and Vietnam were a common combination. About the single dried rose left atop one gravestone. And about the thousands of unidentified soldiers buried here, lost to their families. But, today — remembered.

Welcome, summer! No matter what that silly lunar calendar 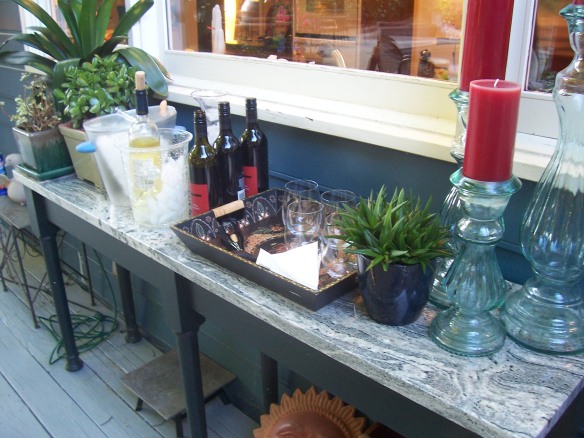 says, Memorial Day weekend is the beginning of the Fun & Sun season. You’ve got food and drink and friends and family — what else do you need? Usually my outdoor entertaining consists of opening a bag of potato chips and bringing paper plates out to the deck, but folks like my friend Sharon in Huntsville, Alabama, know how to do it right. At a recent gathering in her fabulous backyard, she brought the indoors out with metal serving trays and oversized clear glass candlesticks for statement-making pillar candles decorating the wine buffet — a super idea since I usually think of light-and-disposable for outdoor eating. And, Sharon, I think I need another invitation soon so I can copy be inspired by your great ideas.

Capt. Adorable's other grandparents, Sharlie and Buddy Behel, of Tuscumbia, Alabama. See? I can share!!!

Were you lucky like me and got some good family time this Memorial Day? I count myself lucky — and blessed — because my daughter’s in-laws consider my husband and me bona-fide family and invite us to every holiday gathering. And that’s a good thing because I would hate to miss out on all the food and fun that results whenever two or more Behels gather together. Sharlie and Buddy Behel, my daughter’s in-laws, are some of the most generous and hospitable people I know. Their home is always open to family and friends — nobody’s a stranger. They sort of adopted me when my daughter first started dating their son — I was a single mom then without family nearby and with characteristic kindness they took me in right from the start. And since I’m only a year or so older than their oldest son (my son-in-law was their surprise third baby), Sharlie and I feel more like sisters than in-laws once removed. You can see from the picture how much I care about them — I don’t share Capt. Adorable with just anybody!