You know this is a completely objective and un-biased blog

— except when it comes to the Smartest and Most Adorable Grandbabies Ever in the Whole World, of course — and just because I recently went to an Auburn-themed graduation party and had a wonderful time does NOT mean I lean that way. Although it’s a proven fact that Alabama fans are THE MOST obnoxious crowds and Nick Saban is THE MOST inscrutable coach.

Because here in the Heart of Dixie, you have to choose. There is no middle ground between THE MOST annoying folks in the conference and Auburn. See? In my state, even a

graduation party brings out the football in us. I mainly wanted you all to see these fun and creative decorations, such as the crepe-paper streamers that honor the ailing Toomer’s Corner trees and the cute and delicious graduation mortarboards with blue and orange accents, but now I’ve worked myself into such a state that I need another cup of coffee. Anyway, congratulations to Older Daughter’s nephew-in-law on his graduation from not-Alabama. He’s a smart and talented young man who will do great things. War Eagle! 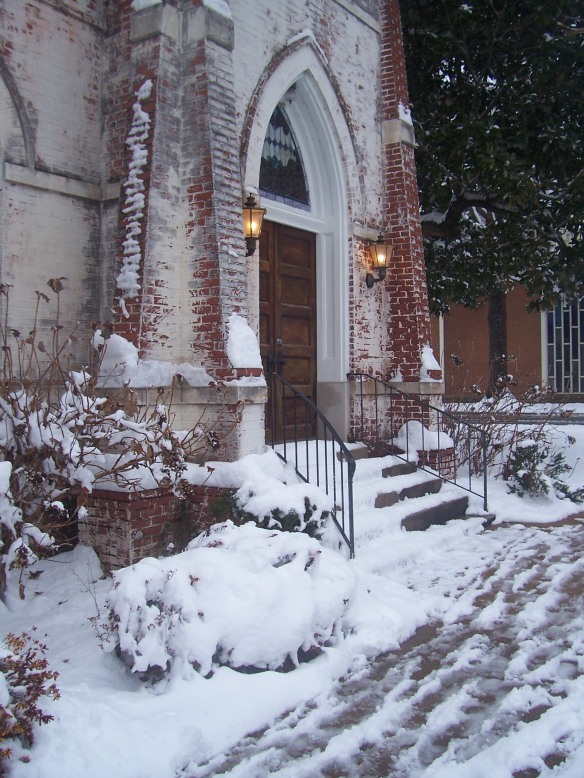 Snow! We have snow in the South!! Also: We have a national championship!!! I’m not sure which delights folks more. Oh, wait, of course it’s Auburn winning the national Bowl Championship Series title. I tried to pick out friends who’d made the trip to Arizona as the TV cameras panned over the thousands and thousands of Tigers fans, but all that orange and blue sort of blended together into one. Like the team itself. (And my sports-editor husband doesn’t think I could be a sportswriter!). Back home, far away from the televised football frenzy, the soft fluffy comforter of snow (I refuse to use the “blanket” cliché) still is keeping things quiet. In my town of Corinth, Miss., the square is deserted except for folks like me out walking and snapping shots such as this one of the Fillmore Street Presbyterian Church — and families mounting riotous snowball fights in the streets. In my family, the competition as always centers on art. Older Daughter reported that she started out making a snow-kid for our 2 3/4-year-old grandson Capt. Adorable. It turned into a snow tower, which she felt looked a bit … well … anatomical, so she changed it to something she called a snow bunny by adding ears and arms. Her artist husband, however, created an entire snow train, topped off with actual ashes from their fireplace for the tinder box. Artistry on the football field combined with artistry in a snowy front yard — I love the South!