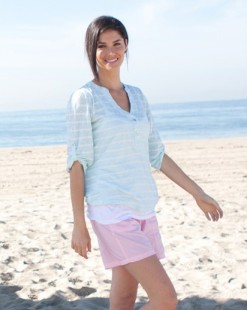 Full disclosure: This is not me — it’s the photo from the Fresh Produce catalog. However, I do have dark hair, especially when I’ve forgotten to go to the salon; I do love a walk on the beach; and my Fresh Produce Buttonside Henley makes me smile, too.

You’re probably like me — you go through spurts of liking a specific clothing style and you simply cannot get enough of whatever it is and you’re determined to add to your closet every single one you find and can afford. Because if one is good, then more than one is better, yes? But not always. Best-forgotten phases for me include tribal scarves (I’d spend 20 minutes trying to get that carelessly-thrown-on look and then immediately pull the thing off a

minute after I left the house because I felt silly. And as if I couldn’t breathe), yoga-inspired T-shirts (Note: Be careful about where Buddha is placed) and the unfortunate brown-pants period when I pretty much looked like a UPS delivery person. (Not that there’s anything wrong with that.) More successful forays have been  into pencil skirts, non-see-through leggings (true treasures!)  and shades-of-black sheath dresses that somehow disguise muffin tops and lumpy thighs. But the thing I’ve been reaching for when I get home after work is a nice soft and comfortable henley top. You know — those sort-of preppy, cotton-knit, three-button, collarless and usually-quarter-sleeve pullovers. I can layer a T-shirt or a tank-top underneath, add a sweater or roll up the sleeves. So when

women’s clothing company Fresh Produce offered to send me anything I wanted from its summer catalog in exchange for blogging about it, I bypassed all the easy-and-breezy (and relaxed-cute) dresses, shorts and skirts and went straight for the henley tops. Okay, I was influenced, as always, by the photo of carefree beach-walking, because that is what I wish I could do every single day. But, my new Buttonside Henley in Classic Stripe — I chose the cheerful Periwinkle color — is an acceptable substitute. Cool and casual, it fits perfectly. (Check the size chart because, according to Fresh Produce measurements, I needed to order a size down from my usual. And the size chart was correct.) Plus, this style passes the Husband Test — unlike the bright-pink jeans I’m waiting to wear. Overall, a winner! Fresh Produce was co-founded and still is run by mom-entrepreneur Mary Ellen Veron and primarily is made in the U.S. You’ll find the clothing sold in Fresh Produce stores, online and in more than 500 specialty retailers throughout the U.S. and Caribbean. 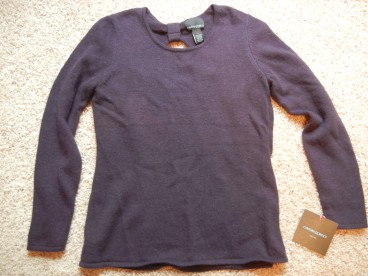 This looks like a cute and perfectly basically simple purple sweater, doesn’t it? It’s from Cynthia Rowley, known for her free-spirited ladylike style, and Younger Daughter grabbed it with delight as we were picking through a TJ Maxx clearance rack. The front of this sweater looks as if it’s saying, “Put me on with a pair of jeans and killer boots and let’s have a great Sunday afternoon just kickin’ around.” It’s casually cool, which pretty much describes Younger Daughter. She was grinning as she placed her find in our cart. But then she picked the sweater back up, looking puzzled. Because she’d gotten a good look at the back, which looks as if it’s saying, “I used to be a super hero entitled to full-cape privileges but then got demoted to merely super assistant. Plus, my back is