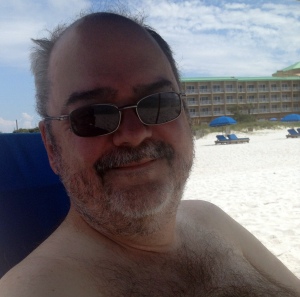 is dedicated to and enthusiastic about his job. To him, following sports stories online for six hours straight isn’t “work” — it’s just what he does. And he does it well. He also is an exceptional boss. He supports and encourages the sportswriters and copy editors he works with and never asks anybody to do anything he wouldn’t do himself. Like be at the newspaper 12, 15, 20 consecutive days. In a row. Now, he and I both are pretty independent people — having a commuter marriage for several years will do that to you — and I rarely invoke a wifely clause but sometimes I just have to insist we Get Away. Luckily, there’s a window of relative calm that comes after college baseball and before SEC Media Days when he’ll agree to sneak off for a week, provided he can take 1) his laptop, 2) his cell phone and 3) my laptop, tablet and smartphone for back-up. He even wandered out to the beach a couple of times. But at least being almost 400 miles from the newspaper prevented those “I think I’ll just run over to the office for a little bit” moments.