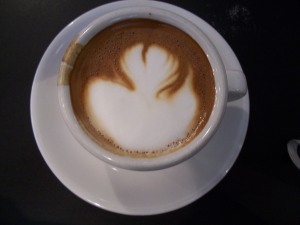 On such a chilly pre-winter morning, I would love to be about 120

miles south, sipping a perfect espresso machiatto in one of my favorite coffee shops — Urban Standard in Birmingham, Alabama. Tucked into an almost-abandoned but formerly-bustling downtown street, Urban Standard is serious about its coffee and wants you to be, too. These folks know what they’re doing, and it shows. The baristas are skilled in all phases of coffee making and take great care

and obvious pride in their work. This is not the place to order a triple super-gigantic fruity-tooty syrupy-sweet concoction. Do not even try. But do order some food. The lunch sandwiches and salads are worth going for even if you don’t like coffee (you don’t like coffee???), and the moist and rich cupcakes are ridiculously simple and simply wonderful. Urban Standard is another one of those spots that started out quietly but quickly became a gathering spot as friends told friends who told friends who told … With exposed brick walls and whimsical metal tables and chairs as well as its eclectic but warm mix of retro/antique/funky decor, Urban Standard doubles as a shopping destination, too — sort of like drinking the best espresso ever in the middle of a hip secondhand thrift store. It’s on Second Avenue North and open 7 a.m. to 6 p.m.  Mondays-Wednesdays; 7 a.m. to 10 p.m. Thursdays-Fridays; and 8 a.m. to 10 p.m. Saturdays. The under-construction Web site is http://www.urbanstandard.net/