Even though the temperature is summer-like today, I still want to wear 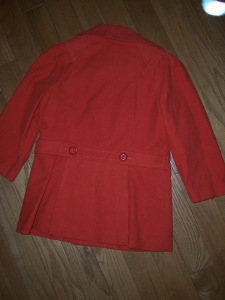 this jacket. I absolutely fell in love with it when I tried it on at Reed’s department store in downtown Tupelo, Miss., the other day. You know how you put something on and you know immediately that it was meant for you and you for it? There is such a thing as love at first sight. I adore the tailored half-belt in the back and the sort of pleated sleeves and the slash pockets and seaming in the front. I usually don’t like double-breasted jackets — reminds me of Mr. Howell on Gilligan’s Island — but this one doesn’t even seem double-breasted for some reason, even though it obviously is. It fit perfectly (even though it looks square in the photo, it’s definitely not when you put it on) and of course who can resist a pumpkin-colored jacket for fall? I’d never heard of the brand “liquid,” but my fashion-savvy college-age daughter assures me that it’s a hot name, so there you go. Actually, this jacket sort of reminds me of the car coats every self-respecting female had to have in her wardrobe about a million years ago — when I was younger.